The melt coming out of an extruder, is given its form in a die head. This is a continuous process, wich can be used to shape sheets, films, pipes, rods, and other profiles. The focus in this article is on dies for pipe production. 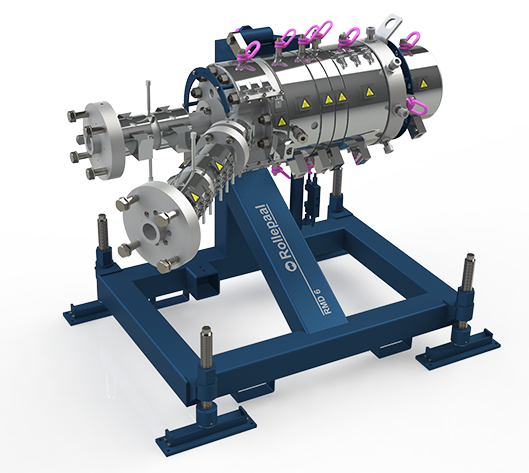 In the die head, the melt will be "opened" into a hollow shape. Depending on the type of pipe, which means the material and the number of layers, in most cases one out of four working principles is used:
1) A spider die consists of an internal mandrel connected to the outer die wall by several "legs" which hold the mandrel. As a result the pipeform will feature weld lines wherever legs have cut the melt. In a PVC pipe weld lines will not occur, provided the compression is high enough to create the perfect weld. When that condition is fulfilled, a spider die head is an excellent choice for solid wall pvc pipes.
2) For PE a spiral mendral die is a possibility, because residence time is less of an issue for PE. In this die principle, the melt is distributed into several feed tubes. The tubes wind around a central mandrel and are connected to the space between the mandrel and the outer die wall; the feed tubes gradually diminish in diameter as they spiral around the mandrel. At the same time, the space between the mandrel and outer die wall increases. This forces the melt to form layers, resulting in a uniform pipe form free of weld lines. This die design is less suitable for PVC because of the long residence time. A spiral die can be used for both single and multilayer pipe.

3) Both PVC and PE can be processed in a coat-hanger die. This die divides the melt over two arms, more or less in the form of a coat-hanger. The arms are curved and have a variable diameter, tapering down to a smaller radius further from the input channel. This principle is typically used to form multilayer pipe, but maintaining uniform wallthickness in all layers and on all sides of the pipe is a challenge. 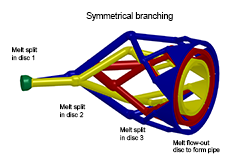 4) The best option to form a multilayer PVC pipe is a symmetrical branched die head. The pipe is formed in the same way as in a spider die. The difference with a coat-hanger die is that all feeding channels are completely symmetrical, so all flow lines are equally long. This allows feeding the melt on different levels from different sides, while creating perfect layers. This principle is also the best choice for foam core pipe. However, foam core is highly demanding, as the melt needs to be even in temperature. An uneven temperature will show itself in thicker and thinner sectors in the pipe wall due to more or less expansion of the gas mixed into the core melt. The formulation -extruder - die combination needs to be in balance, and a standard die fixed to a feed block will not deliver the lowest costs /pipe length. 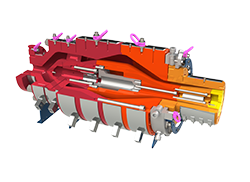 Whatever principle is applied, the melt will always be divided in layers or strips which have to melt together again into one pipe. This process will be enhanced by compression inside the die. Double compression is used in practically all modern die heads, both to increase the output and to optimize the quality. The output of a die can be doubled, by applying double compression. Practice has shown that for reliable production at higher outputs, die heads do need sufficient lubrication to prevent burning by local friction, beard grow etc. Preventing the occurrence of burned particles in the die head is very important to maintain a high pipe quality.