Plastic pipes are produced by an extrusion line, a typical example can be seen in the picture below. Additional equipment, up- or downstream, can be used but is not in the scope of this article. 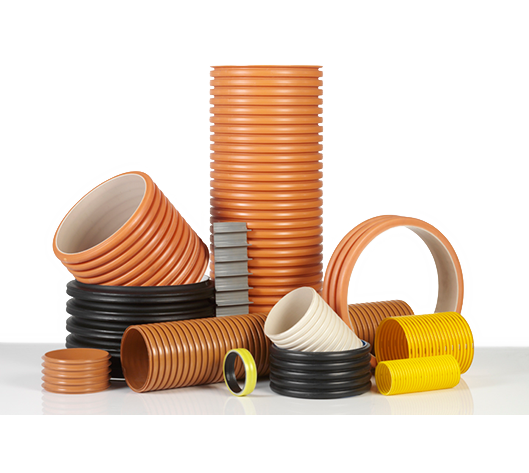 A common setup can be: the extruder with optional process controls (gravimetrics, scanner and automatic thermal centering unit), die head, sizing and cooling, the Haul off and after that a cutting (and chamfering) machine.

The extruder is fed with thermoplastic material. This material will conveyed  into the barrel by one or two rotating screws, at the same time it will be heated to the desired melt temperature. It is possible to mix additives (p.e. colorants or UV inhibitors) right before the raw material enters the extruder, which makes the material logistics much simpler. The screws are divided into several zones, in order to increase the heat of the plastic material gradually. Especially in the case of pvc, overheating quickly leads to degradation of the material.


At the end of the extruder, the melt is forced into a die head which gives the pipe its shape. The flow has to be evenly, because otherwise a pipe with unwanted stresses at certain points would be created and the pipe could end up with a rough finish. The newly formed pipe has to be cooled down in a controlled environment, either with pressure on the inside or vacuum on the outside. The pressure difference is needed to ensure the round shape is maintained perfectly. When a vacuum system is used, non vacuum cooling equipment can be used after the first stage to further lower the temperature.

The pipe is pulled through the cooling system by a haul off. To make sure the haul off does not deform the pipe, the force applied must be divided evenly over the periphery. Producing pipe is a continuous process. At the end of the line there a cutting machine is needed, to cut the pipe at the desired length without the need to stop production.

Reducing energy consumption and the use of raw material has many benefits; it helps the pipe producer to decrease his carbon footprint and optimize his profit.

There are several possibilities to achieve this:
- Create a smooth pipe with less overweight
- Multilayer (foam/high filled/recycled core) pipe extruders and dies
- Direct Addition of fillers
- Gravimetrics and scanners, saving 2-3% dry blend results in a payback time shorter than 1 year
- Less reject, it saves approx. 2/3 of dry blend price. So 3% less reject saves equal to 2% overweight
- Oriented PVC: by stretching a pvc pipe in two directions, the material actually becomes stronger and more capable to resist impact (PVC-O)
- Doubling output at lower reject: replacing 2 old lines by one new with the same capacity
- Controls that speak for themselves and do not need training. The PC under Windows can be connected to the plant's network to provide production data.

First of all: production is often pushed to have higher outputs, but it is wise to make sure that the proposed measures will have the desired effect. If higher production leads to higher reject as well, it is not necessarily effective. Most of the times several aspects of production need to be modified at the same time to be effective. In other words: first master the process, then speed up. Learn to walk before trying to run. Thereafter production can be made more efficient step by step by higher output, less overweight, cheaper formulations, more automatic process controls, etc. without sacrificing the quality. The standards for the pipe application should still be met.

A good fit for formulation, extruder and dies is the best guarantee for higher rates at lower reject and improved reproducibility. Technological advanced designs go without the need for high pressures and heavy cooling (energy loss). Such enforcement is seemingly better for maximum control but is in the end an afterwards correction. Sound equipment design for a wide processing window is the best basis for plant excellence at low maintenance, while training requirements are reduced by controls under Windows -everyone is familiar with it- and by reproducibility.